“My Journey into semi-oblivion and out the other side”

In 1959, towards the end of two happy years at Teacher Training College, I developed health issues which needed repeated minor surgery. After this I became depressed and unsure of my ability to cope with my future career. I then found myself in hospital and my life on pills began. Later I began to teach in a village primary school, where I was happy and respected.

The mid 1960s saw me switched from ‘major’ to ‘minor’ tranquillisers.

Gradually and insidiously I began to change. Anything out of routine threw me, no interest in hobbies or cooking, invitations declined, and in bed by ‘Countdown.’ At weekends I took to my bed in a darkened room, ignoring doorbells and telephone calls. My confidence plummeted, and anxiety stormed in. Plans of work for the next term were started the day a holiday began. Christmas preparations completed by October, bills paid immediately, everything MUST be done today. I thought this was the real adult me.

In the mid ‘80s a little more publicity emerged and my GP suggested I abandon my ‘little helpers’, but I cut too quickly and failed. A hospital-led tranquilliser group was found, but here, because cutting rates were planned by the facilitators, success was in danger.

I then heard about a voluntary organisation, part of which later became BAT, so I left the hospital group and joined it. The new group encouraged people to make cuts when THEY felt ready and they offered real support and invaluable information. With help from the facilitators, group members, my mum, two very special friends and later with respite from work, I became benzodiazepine-free in August 1988.

At times it was very difficult, but with constant reassurance from all my helpers, my bed became a forsaken friend, my confidence grew in leaps and bounds and I started to become the adult I really was. My personality grew and flourished. I became more outward-looking; enjoyed social gatherings, old hobbies were rekindled and new ones emerged. LIFE was for LIVING. Gone were the days of JUST EXISTING.

So what now, 25 years on from that memorable day? In 1996, I founded school reunions at my old secondary school, which continue to this day. In 1997 I took the first of ten balloon flights.

I go on caravan holidays, sometimes alone and in semi-deserted places, I grasp every opportunity to organise and go to parties, I am a highly-regarded photographer, family historian and archivist. I enjoy gardening, theatre, entertaining and fundraising and so the list goes on. Naturally life problems come and go, but inner strength has replaced pills in the confronting and overcoming of these. Perhaps, as memories of my semiconscious years continue to fade, my story may inspire hope and promote confidence in fellow benzo comrades, as they too, seek their road to freedom.

SO! DIG DEEP! JOURNEY ON! HEAD FOR THE LIGHT AT THE END OF THE TUNNEL and you too can embrace the awakening world beyond!

Dot reflects on some of the aids which helped her along her road to freedom. 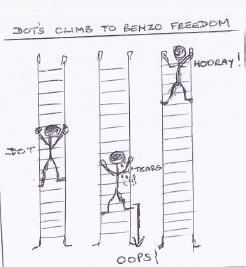 Dot has been supporting a close friend in a care home, entertaining, enjoying theatre visits, establishing her new patio and garden, preparing for her 10th school reunion and has prevailed over a long drawn out dispute linked with her new home. The benzo free Dot seldom gives up! Recently she has rejoiced in the fact that, now in her mid-70’s, she can still climb over a six bar metal gate unaided to gain access to photograph a field of poppies!

Since the last update Dot has had a challenging year, with mixed blessings. On the down side she has experienced more issues linked with her home which unfortunately continue to this day and test her strength and courage to the limit. On Benzos Dot feels that she would have ‘fallen apart’ and definitely would have needed more medication. However, with perseverance and with the support of a few loyal friends she remains positive and hopeful that a satisfactory outcome is on the horizon!

On the brighter side, at last year’s school reunion in Devon, Dot met one of her classmates when she had neither seen nor heard from for 58 long years. Joan was the missing link in Dots chain of school friends. Just imagine how their tongues wagged as the intervening years flew by! Since then Joan and Dot have met several times.

Dot continues to find time and energy to support her friend in the care home and, in the summer, with the help of friends, took her to the city to count sheep on the Shaun Trails. 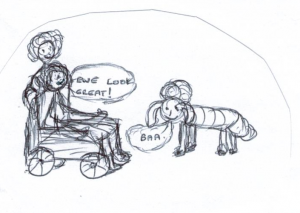 In the light of these events, Dots message is, that life after Benzos will still have ‘ups and downs. However, in her case, the inner strength and resourcefulness gained from relinquishing her ‘chemical props’ is enabling her to cope with seemingly insurmountable difficulties and is instilling in her a determination to ‘dig deep’, ‘hang in there’ and have confidence in the knowledge that, at the end of the road, a favourable outcome awaits.

Can I just stop?

No, sudden withdrawal (Cold Turkey) from Benzos is simply not safe. You can suffer seizures…

How long will it take?

When will I feel better?

Withdrawal symptoms vary from person to person, several people have no symptoms at all, while…